Follow our portable shed project on top of a mountain

Whoever said club spirit was dead didn't join the work crew and head up to Mt Goonaneman in January 2017 to be part of stage I of the portable shed project.

But 8 members did - Stuart VK4FSTU & Gary VK4MDZ who designed & prefabricated it in their sheds, were ably assisted by the muscle power of VK4JRO, VK4OH, VK4KDS, VK4ION, VK4HAX & Coral Dean, [who sadly doesn't appear in any of the photos as she was so damn busy working everywhere].

Here are some images of the project so far.... it will take some time to fully erect and we'll keep adding photos, so do check back.

We're also searching in the archives to find similar shots from 1976 when former club members did the very same thing. Strangely those chaps appear to be a good deal slimmer than us!

We did come to a couple of conclusions... whoever said hard work wouldn't hurt you... should be beaten with a stick... and we're all too old and knackered for this hard work.....

and we also decided that anyone who didn't work that day does not get the right to say.... 'you know what we should have done' ... sounds pretty very fair to me. 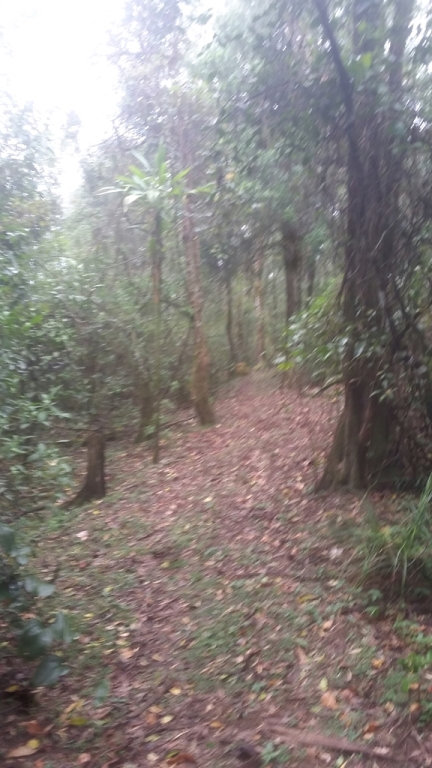 That infamous TRACK... it's only about 350m long but it's that long uphill gradient that's torture... when you're carrying a heavy load on a side-sloping path. 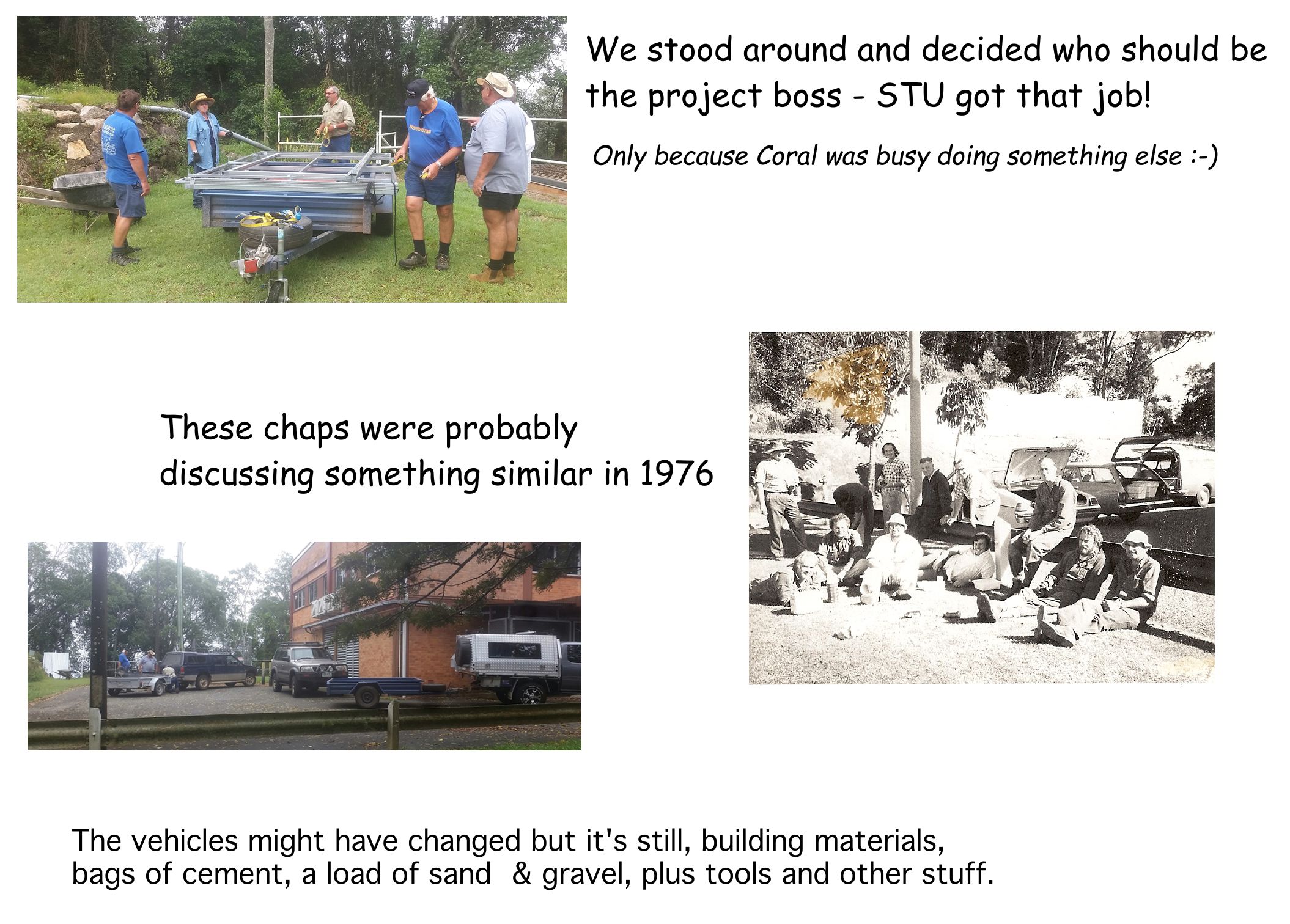 Everything unloaded... Right team - carry everything UP THAT HILL...

The shed must be removable so it was built in prefabricated sections which are bolted together on site. 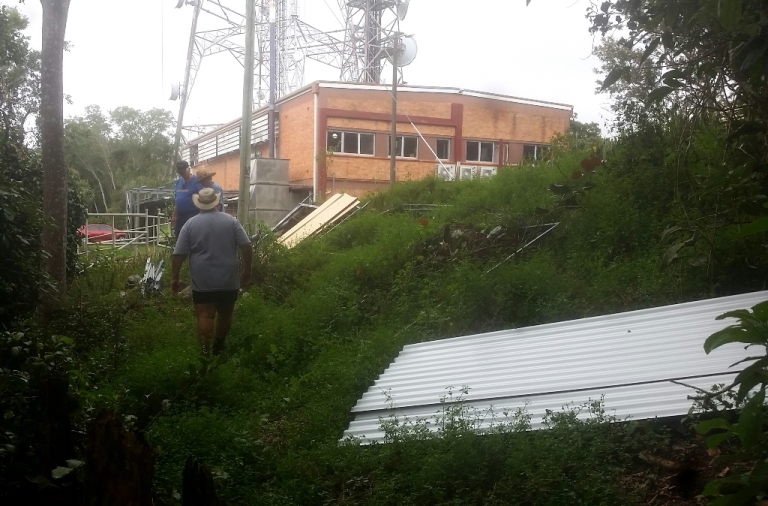 First unload and get all the gear over the obstacle and onto the path... VK4MDZ and VK4ION went on ahead to clear the encroaching lantana with a machete, so our worker ants could begin the never ending trips up and back... up and back. 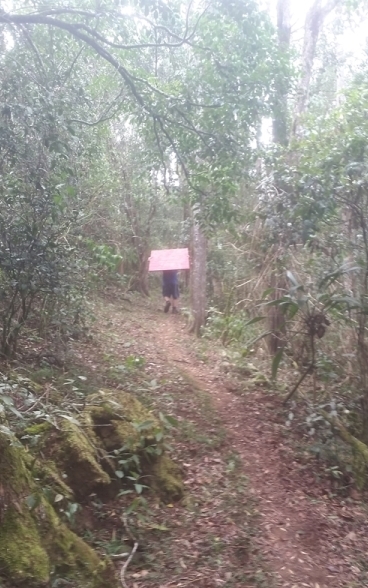 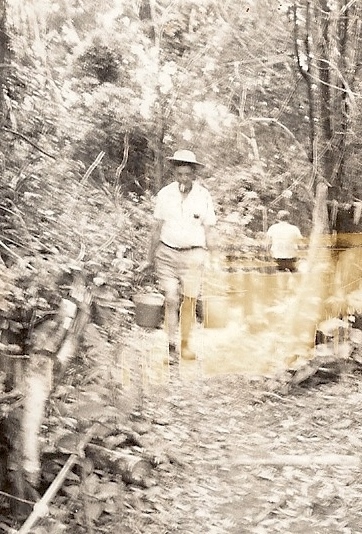 That's David carrying timber flooring on his head and Tweedie Svenson carries 2 buckets of gravel along the same track in 1976.

It's quite spooky that nothing has changed... still a tough slog.

Shovel the gravel into the wheelbarrow and away you go... we learnt pretty early that overloading the barrow meant it tipped over on the sloping path... so it took many small loads to get enough material to the top. 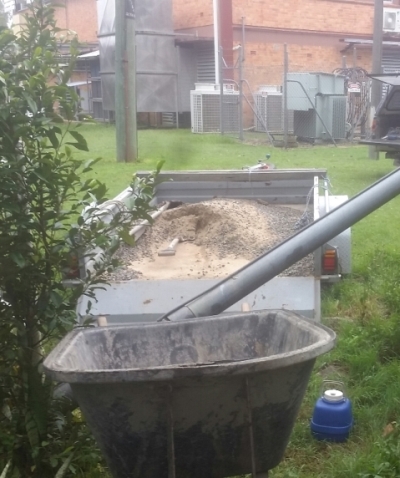 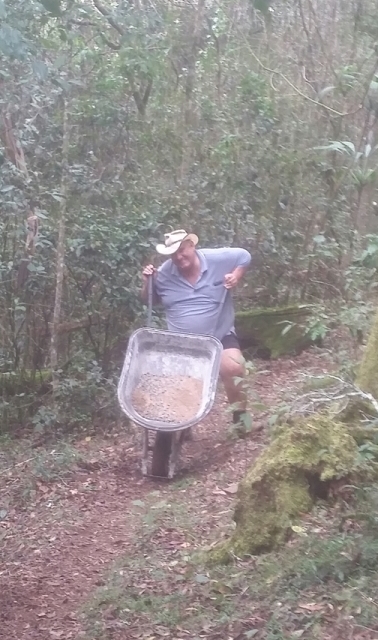 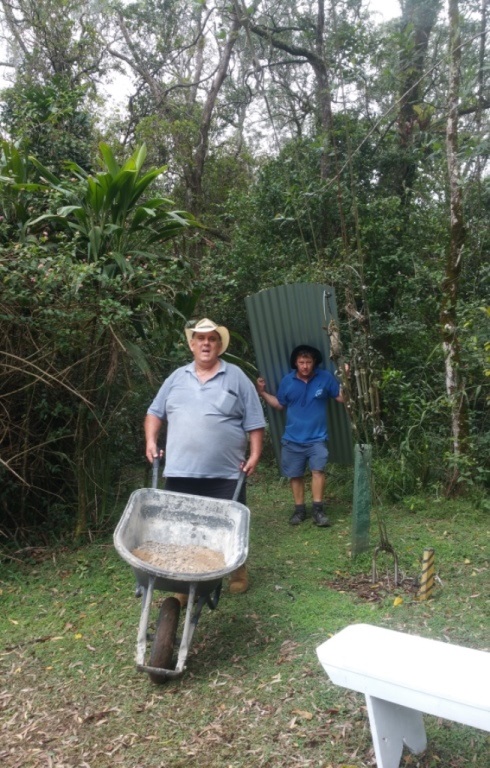 NEVER were 2 men more happy to reach the top.... now turn around fellas and do it all again.

Ross pushed that barrow up and down the hill so many times and David trudged up and down with him, hauling timber and sheets of iron. What true legends they are. 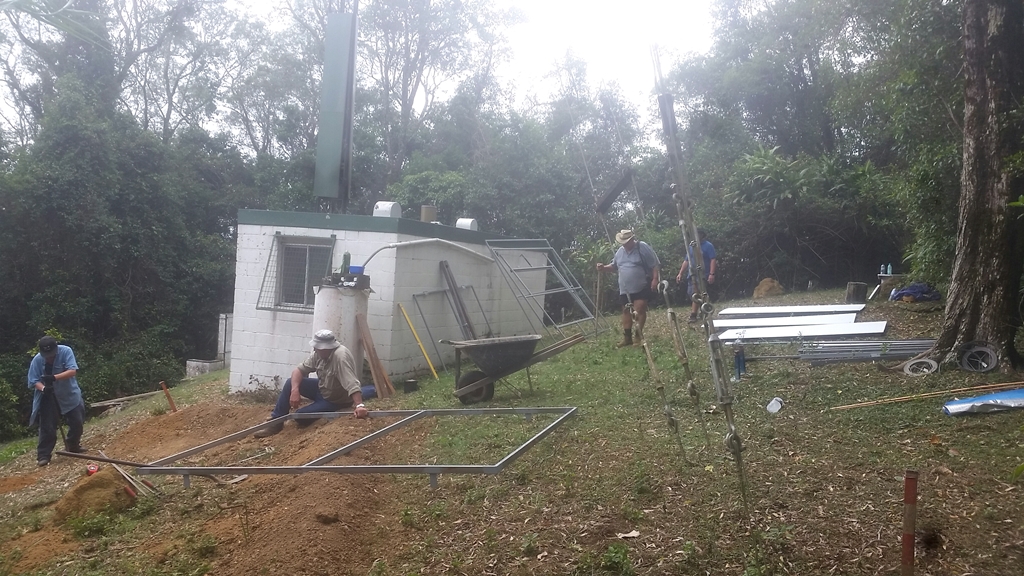 Finally everything was at the top... We voted -we're buying a helicopter to carry stuff up in the future!
Who's going to put THAT to the Treasurer? 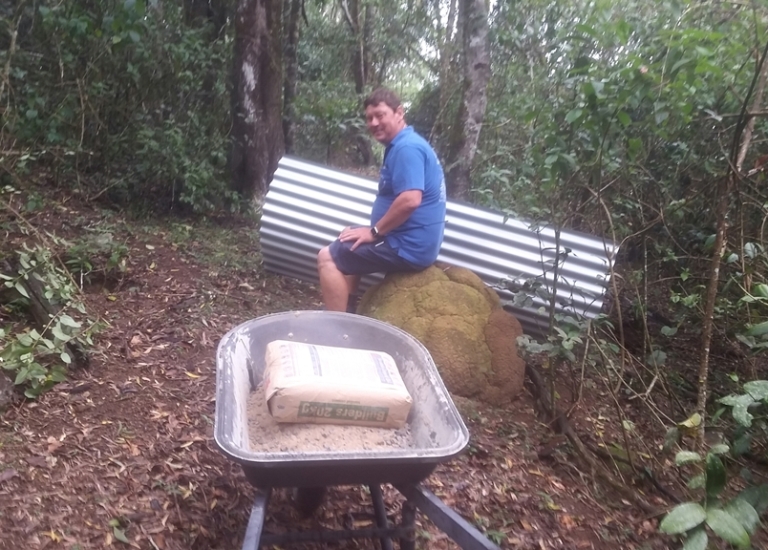 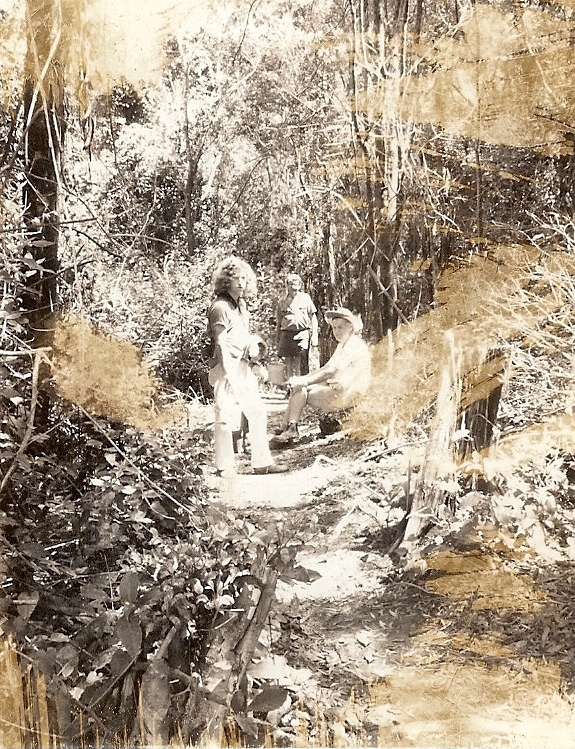 And it's deja vu all over again... David takes a breather about half-way up and here they are in 1976, also downing buckets to regain their breath.

Are we having fun yet 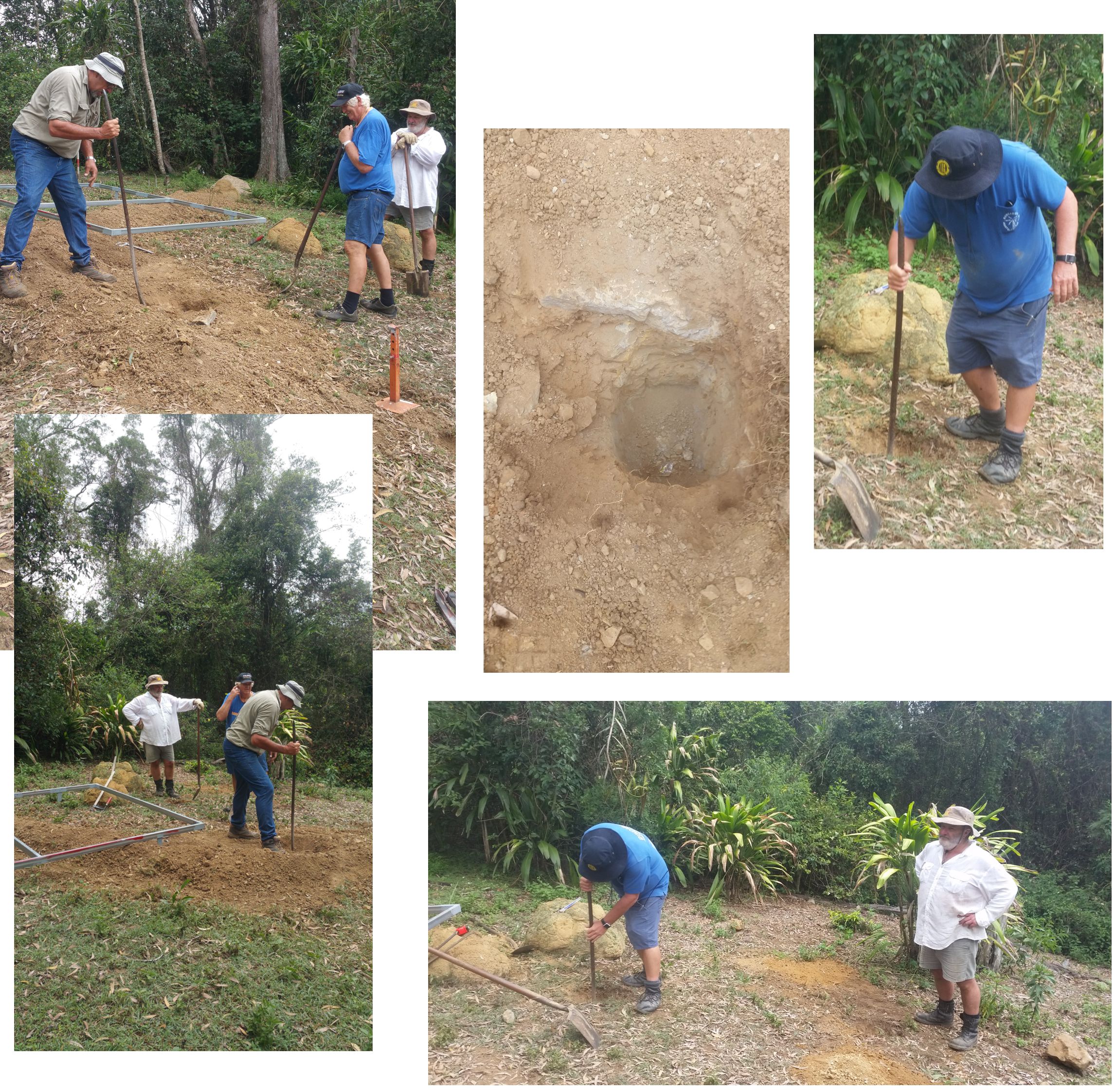 But everyone got in an had a go on the crowbar.... errr taking a closer look at these images.... which chap might be leaning on the shovel more than most? 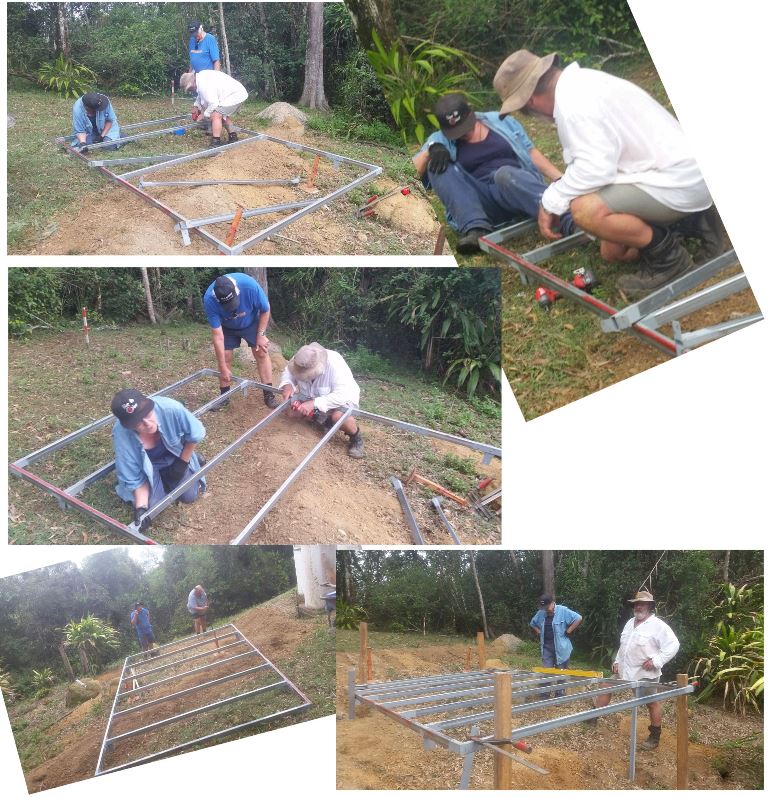 Now bolt on the legs - whatever you do, don't mention who cut the wrong end of a leg post. 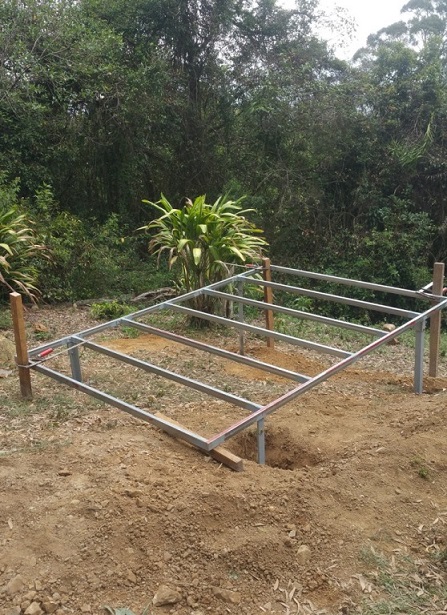 OK, Holes are at 800mm - let's get this baby level and mix some concrete 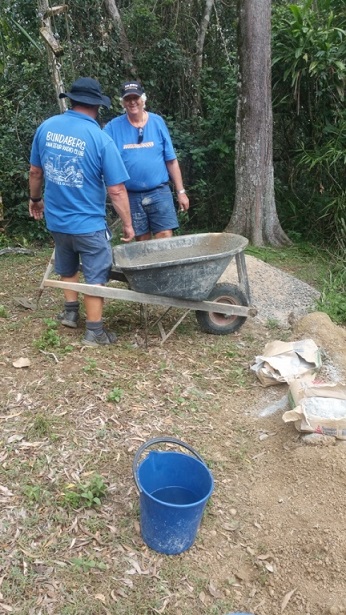 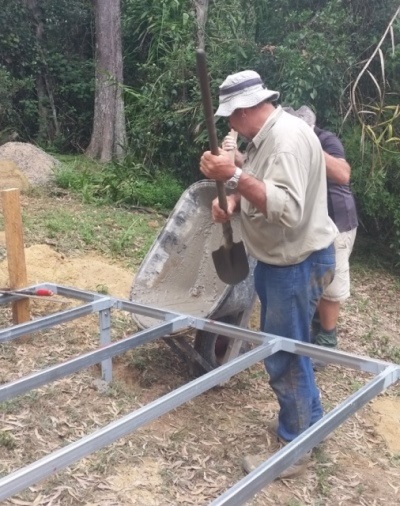 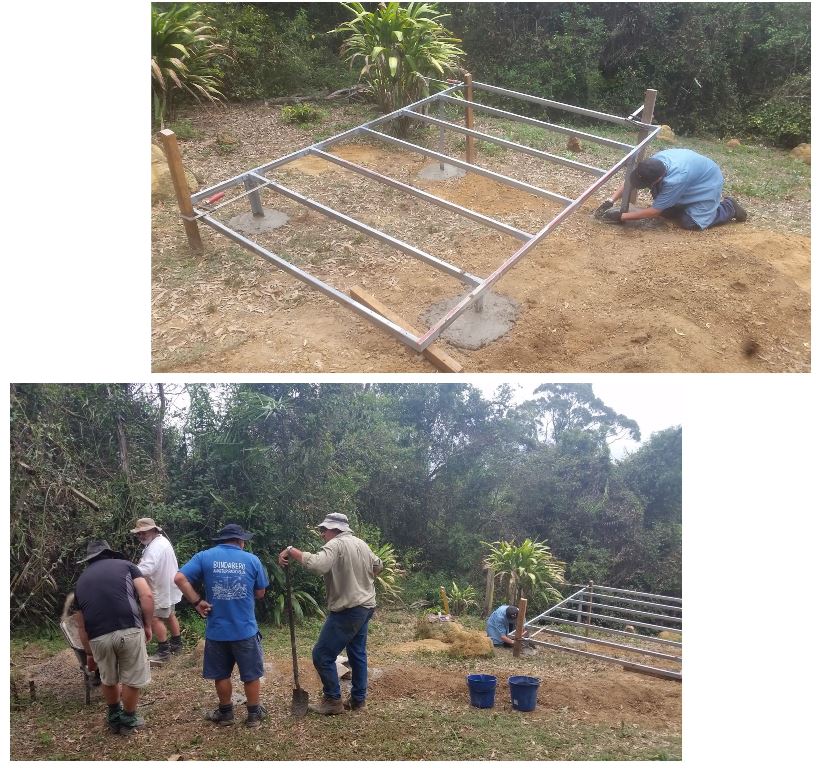 And that's enough for today. we'll be back when the post holes are set.

On a fine Thursday morning 4 members made trip back up the mountain to continue work on the project.

With an hour's travel each way and 9 hours on site, it was a HUGE day and we thank them for their efforts.
Unfortunately it was one of those jobs... that once they started, and laid down the timber floor, they couldn't walk away until the structure was waterproof.

Due to the steep slope of the land, it was tough going, up and down the ladders for most of the day.

It will require one more trip to finish off the project, but at least the site was safe and secure for the time being.

Enjoy these images taken on the day. 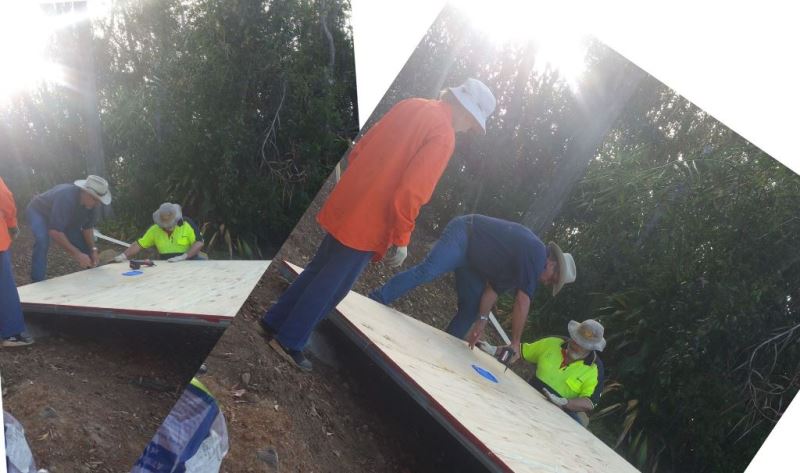 The floor is glued and screwed. 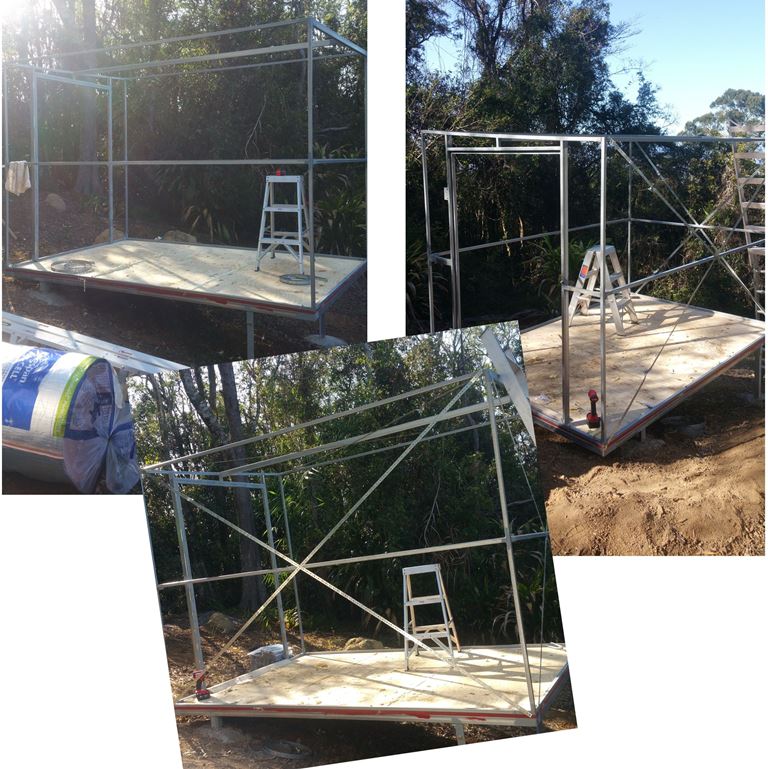 Up goes the framework and the cross-bracing is tensioned. 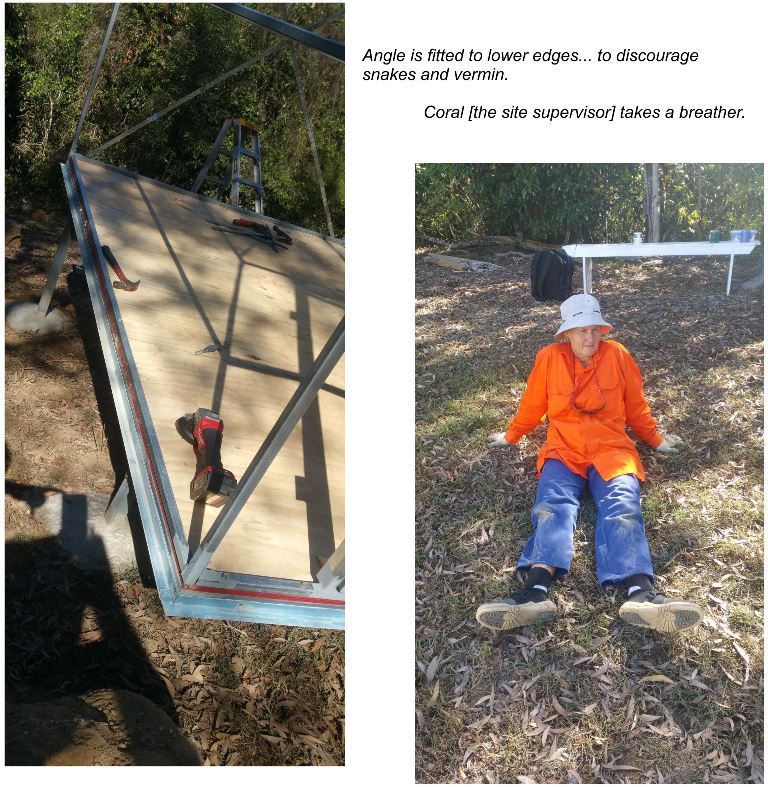 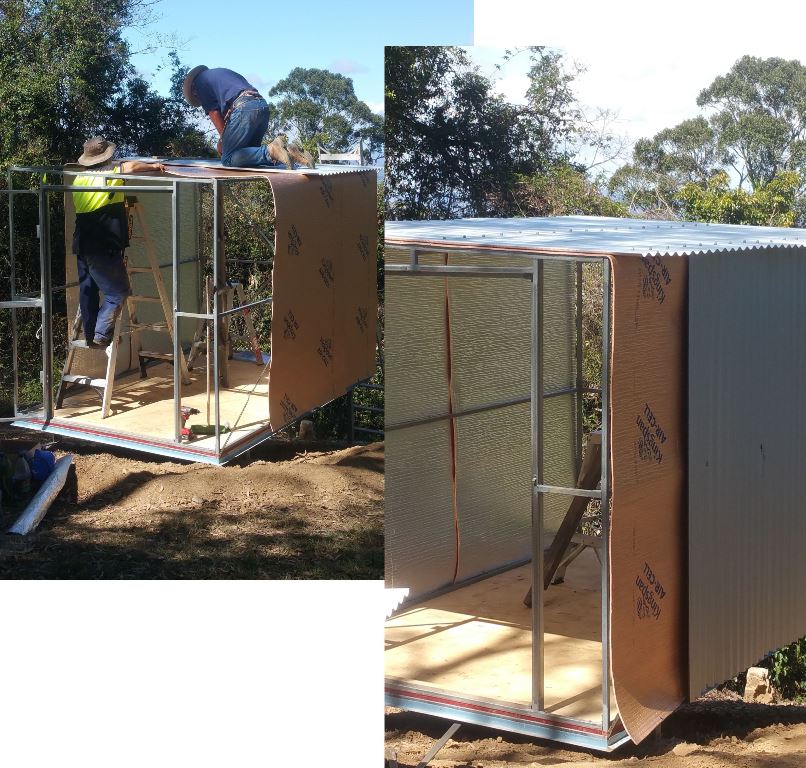 Insulation goes up and over, the roof sheets go on, and then it's time to begin sheeting the sides 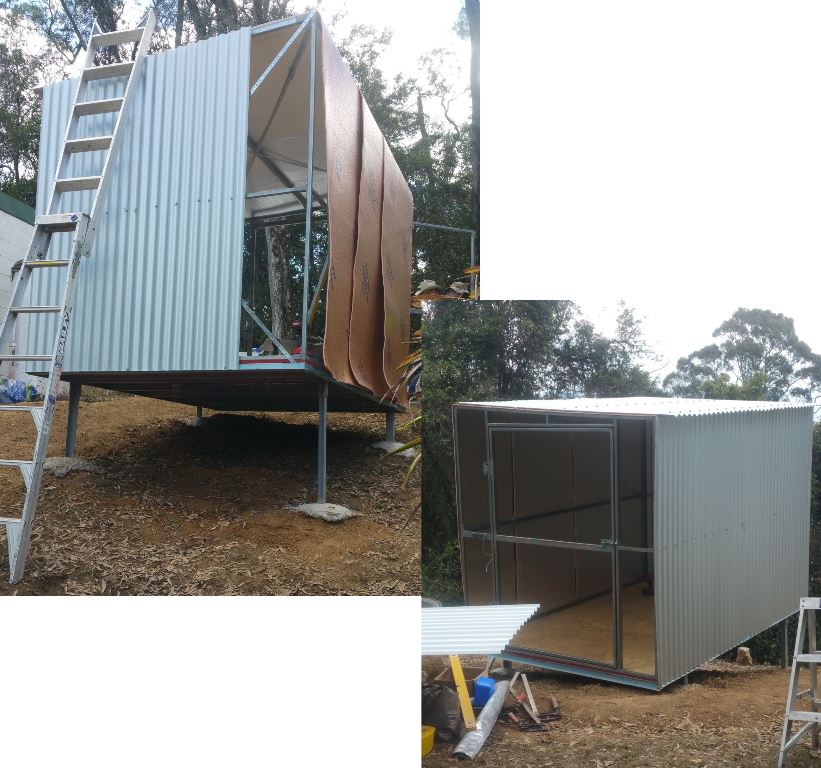 It's slow going, working their way around the frame. 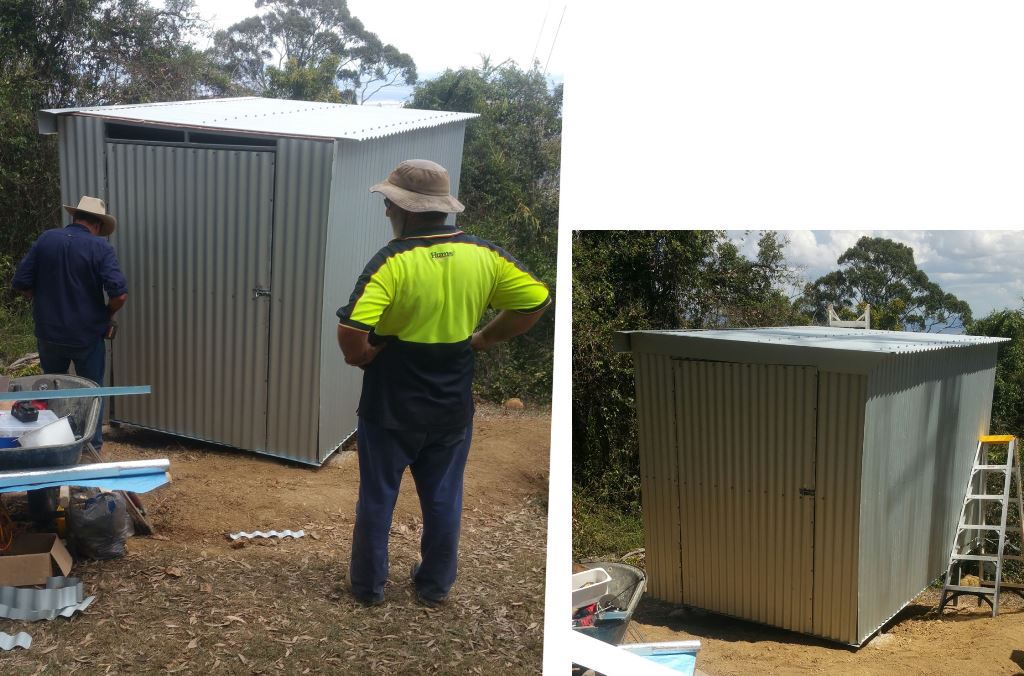 Door is fitted and it's time to fit flashing 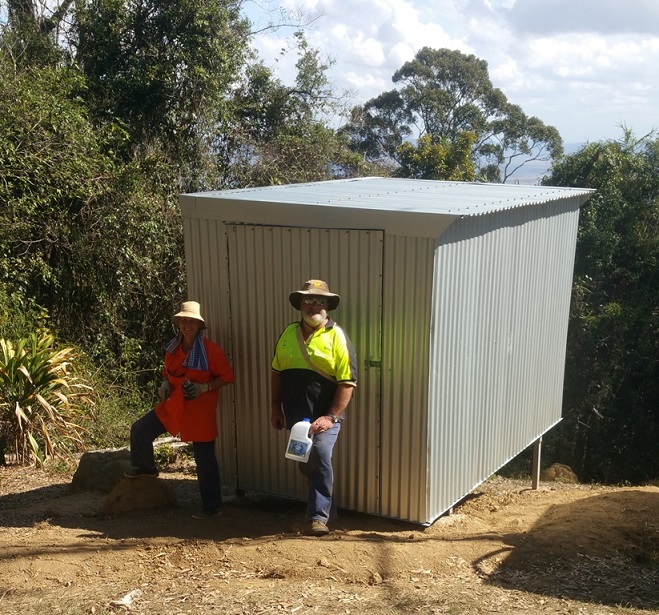 Coral & Gary pose in front of the new waterproof shed... the site is clean... it's time to call it a day. 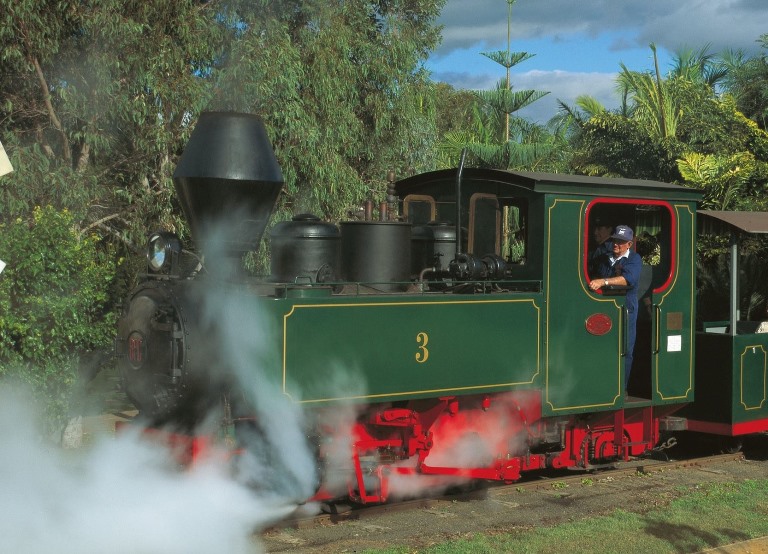 We got tired of walking up and down that hill... this is the project we're working on now! 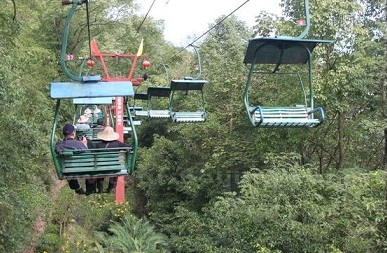 Ooooh this should give Stu and Gary some fulfilling hours in the workshop.

If you notice any errors on this page please email: