The Try Arder Cup went from this...

Nurtured in our fair city it became all that is magnicicent... Glossy and bejewelled, our very own Eastern Princess!

You can read all about the antics at the Buxton2011 page

Oh the shame.... but were they BURGLARS! 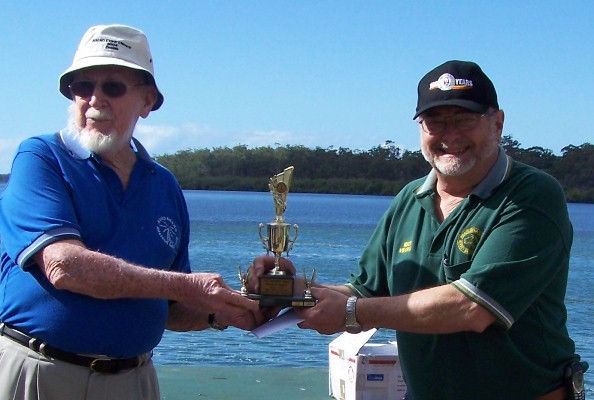 Yes, sadly our day @ Buxton in 2010 saw us give up the trophy, but Hervey Bay insisted that we take a little something home... just to make us feel better.

What's this competition all about?

Each year members of the two clubs compete in the contest called the Harry Angel Sprint trying to amass big scores which are totalled for each Club.

It's a 106 minute contest honouring the late Harry Angel who lived to 106 years young and who was a great Amateur Radio enthusiast.

Our two clubs are what you'd call "Great Mates" although one club is "caring and sharing"... and the other isn't... [well that's our story and we're sticking to it!]

The object of the Interclub challenge is to encourage Club Member participation so it’s NOT a contest for the highest individual score.

Rather it involves working out the ratio of how many members with Callsigns could participate against how many actually did participate.

The contest was designed & the rules decided by VK4ACB & VK4JM in 2007 (both were the Secretary of their respective Clubs at the time).

The Trophy was originally the H.B.A.R.C. Pat Dryden [VK4PAT] Trophy for Outstanding Service to the Club and it was decided to honour the past Hervey Bay Club President by utilizing this trophy and retaining the name.

We work out the ratio or factor for each club and multiply it by the official point scores when they're published by the contrest Manager..

Of course the reverse is true... so if you have a lot of members but only a few participants.... whoops... there goes your factor and it really drags down your final score.

In our Interclub challenge the Highest NEW Score wins Trophy

It works like this: We take the total number of Club Members (and discard this number!

Take the number of club CALLSIGNS who participated in H.A.S. (as published in the AR Magazine or extract a list from the Contest Manager.)

This gives each club a "New Score” – the highest New Score WINS the Pat Dryden Trophy – to be awarded at the annual HBARC/BARC BBQ held at Buxton.

Here's a couple of examples of how the scoring works:


So you see no matter which way you try the examples, increasing the club turnout really boosts the scoring. So even a small club with enthusiastic members will beat a lone high scoring member or a bigger club with more lethargic members.

Thus we achieve our aim of creating a competition which will reward the club who can enthuse it's members and get them participating in the Sprint.

To recap, The Secretary’s Duties:

Just before the Contest - List your members with CALLSIGNs
Pass this list to the Secretary of the other club [so there isn't any stacking of the scores later!!]
Encourage participation by YOUR club members in the Harry Angel Sprint
Participate in the H.A.S. – it's only 106 minutes and great fun

Encourage YOUR Members to SEND  THEIR LOGS to the Contest Manager - No logs sent means NO score counted!

Get a list of Particpants and Scores from the Contest Manager
[if they're not published in A.R.]

Compile a list of Your club Members Callsigns and Scores.... and the other Club's as well [can't hurt to check, now can it **wink wink**]

Work out the CLUB FACTOR - Total number of Club Members participating divided by the total callsigns possible.
Multiply your Factor by the Combined point score of all your members.

Compare the scores with the other Secretary

Gloat and claim the trophy – SIMPLE AS THAT!

All that's left to do is arrange the annual HBARC/BARC BBQ and ensure the trophy is on hand to be awarded to YOUR club.
Have the new “Year shield” engraved and attached to the Trophy

Our postal address is:

If you notice any errors on this page please email:

Like what you see? BARC has been with Unlimited Space for over 6 years!
Why not try this Aussie company for your Web Hosting needs